The Link Between Sex Trafficking and Abortion 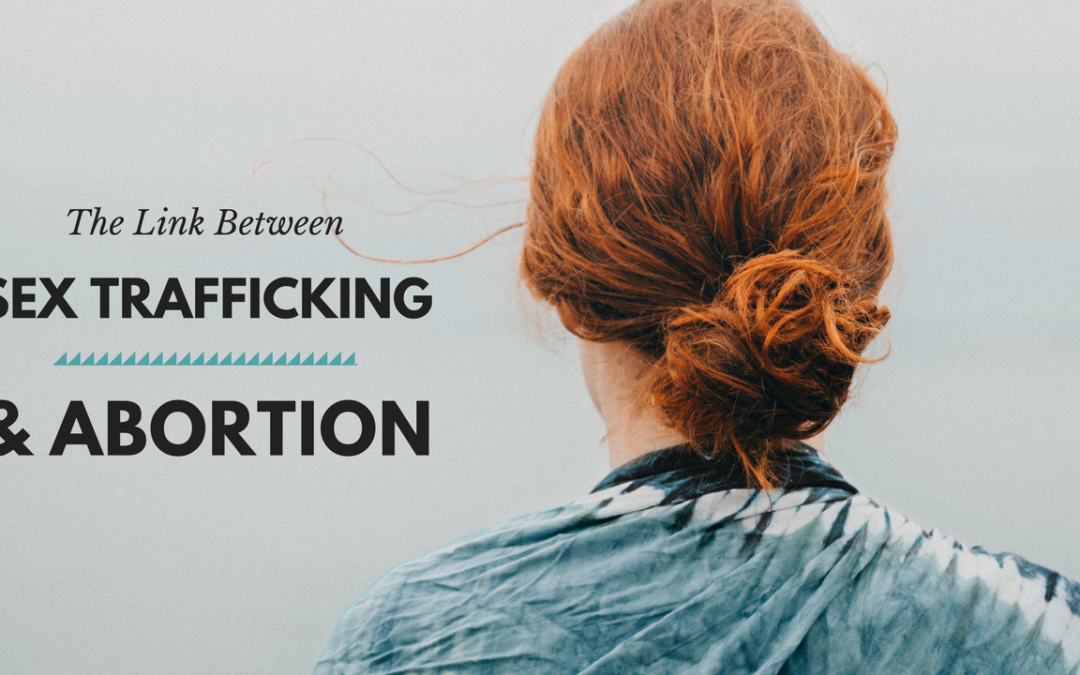 Research and stories can help us understand the link between sex trafficking and abortion. This article includes a fictional story, based loosely on the experiences of real people, and a summary of recent research on how abortion is used as a tool of sex-traffickers.

The Story: Sex Trafficking and Abortion

This is the day, she thinks to herself, stuffing clothing, shampoo, and a little cash into a backpack. This is the day that I’m leaving this place for good. I’m leaving my alcoholic mother and her abusive boyfriend and I’m never looking back. He will never hit me again!  I can’t stand the pain, seeing how she sits back and does nothing while I suffer. I don’t want her to suffer but I can’t handle this anymore.

Hot tears fall from her cheeks as she throws the backpack over her good shoulder. She heads to the kitchen, and scours the cupboards for granola bars and hidden cash.

Whispering a final, tearful ‘goodbye’ to her mother, still drunk on the couch from last night’s escapade, she quietly leaves the only home she’s ever known and rushes to the bus station. Carefully hiding her bruised arm and collarbone, she buys her ticket, hoping against hope that she’ll make it to her father’s place in the city; that she’ll be able to find him with nothing more than his name; and that, after explaining her situation, he will take her in and care for her.

She boards the bus… alone.

A Desire to Be Loved

She watches out the window as the tall buildings of the city grow larger, ever closer. She arrives and exits the bus with her meager belongings.

Sitting on a wooden-slatted bus bench, munching granola and counting what’s left of her funds, she begins to realize her uncomfortable situation. She has less than $10. Not enough for a taxi. Certainly not enough for a hotel room.  She stays put for 30 minutes… one hour… three hours. Fear and uncertainty take hold with increasing measure as she continues to consider her options.

A Moment of Vulnerability

In that moment of vulnerability, she is approached by a young man, he appears to be in his early twenties. He’s nice enough to look at and offers her a warm and friendly smile, “Are you looking for someone?” he asks.

Something nags at the back of her mind, warnings about strangers and boys, but he seems friendly enough. She brushes aside her worries, “My father. He lives here in the city.”

“Do you know where he lives?” he pries. “Maybe I can help you out.”

Again, that nagging thought. But the setting sun and diminishing traffic remind her that it’s getting late… and bus stations are a little frightening. She responds with hesitation, “No, but I know he’s here. I’ll find him.”

He sits down next to her. “Wow. You must have really been through something,” he says, sympathy in his voice and demeanor, “to come here not knowing where you’re going. Do you have a place to stay for the night?”

She looks down at her feet, again uncertain. She’s alone. She doesn’t know anyone in this city and it’s getting dark. If I stay here too much longer, a police officer is going to come. I can’t go back…

What this young women, barely out of childhood, doesn’t know is that this man is skilled in the art of finding vulnerable youth. He lures her to his home with promises of assistance and care. He provides food, shelter, and the flattering words she has so longed to hear: that she is needed and valued.

Time goes by and, before the young girl recognizes the lies of her would-be rescuer, she has fallen into the world of human-trafficking.

While this story is fictional, for some it’s pattern is a stark reality[1]. (See “Elsie’s Story: https://stoptraffickingdemand.com/elsie/.) It even happens here in Nebraska. Anthony Swindle, an Omaha native, was recently convicted on two counts of trafficking. One of his victims was 15 years old.

The average age of entry into trafficking is uncertain; however, some studies estimate it to be from 12-15 years old.[2]. Risk factors for entering trafficking situations include physical or emotional abuse by parents, sexual abuse, neglect, divorce, etc.[3]

The World of Sex-Trafficking

Day after day, she is sold for sex; 13 buyers per day, on average[4]. She is physically abused, experiences occasional memory loss, and her “friend”, now pimp, has begun to give her drugs to aid her in dealing with the emotional traumas of being involved in the sex-trade.

One morning she wakes up and feels unusually sick to her stomach. She jumps out of bed, rushes to the bathroom and vomits last night’s dinner. She tries to eat breakfast but the feeling continues throughout the day; she can’t keep anything down. Her pimp recognizes the signs of pregnancy. He’s seen them before.

He brings her a pregnancy test. It is positive.

“How could you be so stupid,” he rages! “Do you know what this means! You can’t work today! I’m going to have to take you to a clinic and that means money and I can’t take care of my other girls!” He moves towards her, body language threatening. She scampers out of his way.

I’m pregnant! She thinks. I can’t be pregnant! I’m only 14 years old! She remembers what her life was like growing up and puts a hand protectively over her stomach. She looks up at him.

“What do you mean ‘take me to a clinic’?” she asks softly, concern in her voice.

He rolls his eyes, “Abortion, stupid. I’m not taking care of you when you can’t work!”

Her eyes widen at the thought of a respite from the never-ending revolving door.  I can’t work if I’m pregnant. She smiles to herself before catching the scowl in her pimp’s eyes. She quickly looks down in shame. He has provided for her. He needs her.

“Get dressed,” he says with frustration and walks out, slamming the door behind him.

This is the day, she thinks to herself. This is the day I’m going to find my dad. Pimp will have to let me talk to the workers alone. I don’t want him to get in trouble, he’s taken care of me after all, but I don’t want to do this anymore. The clinic will help me, won’t they?

A Silent Cry For Help

They arrive at the women’s health clinic a few hours later. Pimp does the initial talking, telling the secretary that his girlfriend needs an abortion and they don’t have money to pay. The secretary agrees to start the process, giving ample sympathy for their plight.

Her heart and mind cries out to the universe, to someone, anyone who will listen, Please! Help me!

Again, while this story is fictional, there are many for whom this experience is reality. One girl will enter a clinic and leave with a social worker who will help her start a new life. Many will leave with their pimp to continue their lives of abject slavery, their trauma unrecognized and their mouths shut by uncertainty and fear. [5]

The Research: Sex Trafficking and Abortion

The secretive world of human trafficking, as well as the average 7-year survival rate for commercially trafficked women[6], makes it difficult for researchers to study the reproductive issues of victims. Laura Lederer and Christopher Wetzel, in a study entitled “The Health Consequences of Sex Trafficking…”, provide a rare glimpse into the reproductive world of human trafficking. Their study produced the following information[7]:

Abortion, a Tool of Sex-Traffickers

In an article entitled “Abortion is a Tool to Exploit Sex-workers” by Rachel Peller, states that rather than abortion being a necessary resource for victims of trafficking, “abortion is a necessary resource for the traffickers themselves.” The article further states, “A pregnant victim is significantly less profitable for an abuser. She has increased health and medical expenses,” and, as she becomes noticeably pregnant, “her “value” in the sex industry decreases”.[8]

“Providing [abortion] services to a victim benefits only the trafficker by getting the victim back out on the street and making money sooner.” [9] -Steven Wagner, former Director of the Human Trafficking division of the U.S. Department of Health and Human Services.

While we don’t know how every story is going to end, this is an issue on which the majority can agree: these women need help.

Lederer states “Notably,  the phenomenon of forced abortion,” (and I would add forced contraceptives), “as it occurs in sex trafficking transcends the political boundaries of the abortion debate, violating both the pro-life belief that abortion takes innocent life and the pro-choice ideal of women’s freedom to make their own reproductive choices.”[10]

For those young women as depicted in this narrative, we call upon civic and community leaders to seek ways to identify and recover victims of human-trafficking; those caught in this world of seemingly inescapable enslavement. We also encourage the healthcare industry to provide training to those in reproductive services that they might be better able to recognize the signs of trafficking and provide options other than abortion to those who seek their care.

Even in the last year, Nebraska has taken important steps to combat human trafficking, but there is still much to be done. Let us work together to be a city on a hill and bring light to this darkness.

[2] “Report of the Governor’s Task Force on Human Trafficking”, Nebraska Human Trafficking Task Force; July 9, 2013 (p.12); view at https://nebraskalegislature.gov/FloorDocs/103/PDF/Agencies/Crime_Commission/348_20130709-111559.pdf.  For additional info: The Commercial Sexual Exploitation of Children In the U.S., Canada and Mexico, Estes & Weinter; University of Pennsylvania, 2001; p.92(scroll to 115) https://news.findlaw.com/hdocs/docs/sextrade/upenncsec90701.pdf   https://www.politifact.com/oregon/statements/2013/mar/02/diane-mckeel/Is-average-age-entry-sex-trafficking-between-12-an/ and “Is the Average Age of Entry Into Sex Trafficking Between 12 and 14?”, Janie Harr, PolitiFact Oregon; March 2, 2013 https://www.politifact.com/oregon/statements/2013/mar/02/diane-mckeel/Is-average-age-entry-sex-trafficking-between-12-an/

[4] “The Health consequences of Sex Trafficking and Their Implications for Identifying Victims in Healthcare Facilities”, Laura Lederer and Christopher A. Wetzel, Annals of Health Law, Vol 23, 2014; p.72  Read at https://www.icmec.org/wp-content/uploads/2015/10/Health-Consequences-of-Sex-Trafficking-and-Implications-for-Identifying-Victims-Lederer.pdf

[5] Stockholm Syndrome: “The psychological tendency of a hostage to bond with, identify with, or sympathize with his or her captor.”  https://www.merriam-webster.com/dictionary/Stockholm%20syndrome